A Comparison of ACMI Leasing, Operating Leasing and Aircraft Ownership – To Lease or to Own

To lease aircraft or own? In the ever-increasing uncertainty of today’s aviation environment, where numerous exogenous parameters, such as the pandemic, political instability, oil prices, and climate change, dictate the...

To lease aircraft or own?

In the ever-increasing uncertainty of today’s aviation environment, where numerous exogenous parameters, such as the pandemic, political instability, oil prices, and climate change, dictate the market outlook, airlines are tasked to make important choices for their future. Aircraft acquisition and financing decisions are core to the airline’s business and pivotal to its success and profitability. In a VUCA world, where volatility, uncertainty, complexity, and ambiguity prevail, airlines must constantly analyse their key aircraft acquisition decision: “To lease or to own?”

This insight report analyses the options available to the airlines when making fleet acquisition and financing decisions. The report covers ACMI leasing, operating leases, and aircraft ownership, the pros and cons of each, and when they are best deployed.

In the 1970s, 100% of the world’s aircraft were owned by their operators. Aircraft leasing was virtually unknown to the industry until the 1990s, when it started gaining popularity, with about 20% of the fleet at the time being leased. The market share of leased aircraft gradually increased over time and currently accounts for more than 52% of the global fleet, of which 44% are on operating lease and 8% on ACMI (either wet or damp lease). 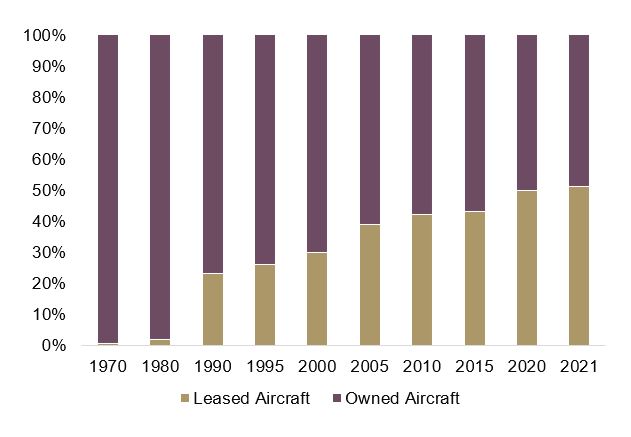 There are two broad categories of aircraft leases; ACMI leases and operating leases; or wet and dry leases as they may be referred to. While they sound similar and both relate to the provision of aircraft renting, they are materially different in many respects.

ACMI leasing refers to the provision of Aircraft, Crew, Maintenance, and Insurance from one operator (an AOC holder) to another for a defined period and utilisation. ACMI leases can be further sub-categorised into 1) a full wet Lease or 2) a damp Lease, allowing for variations in the level of crew being provided by the lessor. ACMI leases are charged on an “all-in” hourly rate with a minimum guaranteed number of block hours each month or over the lease term. 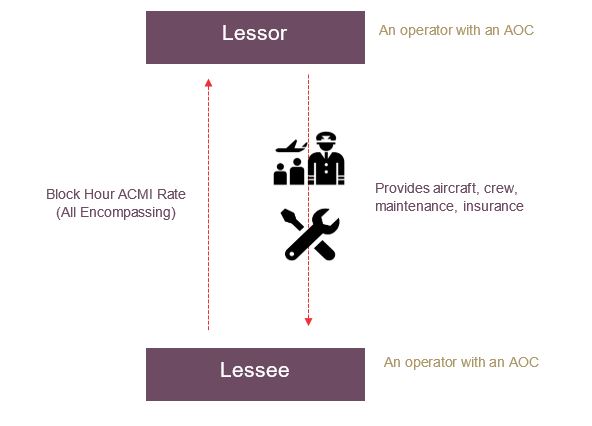 ACMI Leasing is primarily used as a short-term solution for airlines that need periodic or seasonal additional capacity, such as during the peak seasons, scheduled maintenance downtime for their regular fleet, or unscheduled AOG situations. This form of leasing became popular due to the flexibility it provides for airlines to match supply and demand. The airlines may introduce additional capacity without employing additional staff at short notice. Furthermore, it allows airlines to explore markets where they may not be able to do so with their own equipment or to test the suitability of a new aircraft type before investing in crews, training, maintenance capability, and new supply chains, as these remain the responsibility of the ACMI lessor.

A common misconception is that an entity without an AOC can acquire aircraft on an ACMI lease. In most cases, this will not be permitted by the local aviation authority and will need to be structured as a full Charter. For more information on Wet Leasing, please refer to this link: https://www.accaviation.com/acmi-leasing/what-is-acmi-leasing/ 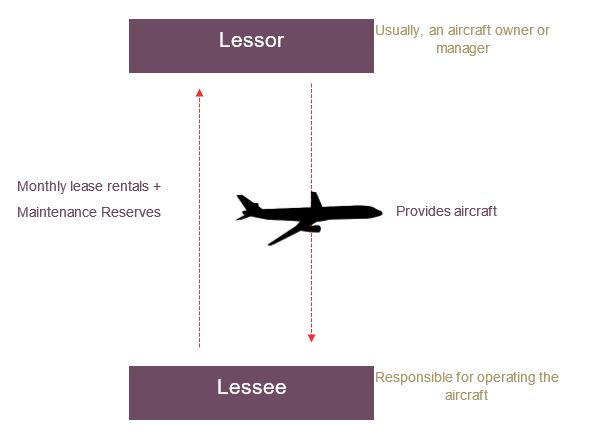 Operating leases have become a popular alternative to aircraft ownership, accounting for more than half of the global fleet. Operating leases allow an airline to expand its fleet without the requirement for large capital expenditures, helping airlines to protect their liquidity position and mitigate the risks of asset ownership. Many operating lessors place their own orders with the aircraft OEMs (Original Equipment Manufacturer) and have a constant supply of new aircraft coming to market.  When an Airline places their own aircraft order with an OEM, they often need to wait several years for delivery of those aircraft. In contrast, operating lessors, through their order books, can typically provide access to new aircraft with much shorter lead times.

A finance lease is a variation of an operating lease and shares a great degree of similarity. However, the transaction is structured where the risks and rewards of aircraft ownership are meant to pass to the lessee at the end of the lease term. From a cash flow perspective, the transaction is structured closer to traditional financing with a larger deposit and larger monthly lease rentals. However, conversely, the lessor remains the aircraft owner until the lessee exercises its right to own the aircraft – typically through a nominal or below-market purchase option at the end of the lease term.

The increased popularity of aircraft leasing means that there are fewer aircraft directly owned by their operators. Given the significant capital costs of an aircraft, it is rare that aircraft are acquired without third-party financing. Depending on the financier’s perception of asset and credit risk, lenders typically finance between 70-85%% of the purchase price, leaving the airline to pay the remaining 15-30% out of its own capital. In some cases, junior or mezzanine financing may also be sought to increase the total financing used in the transaction.

The cost of financing depends on several factors, namely the credit risk of the airline, the asset risk related to the aircraft, the risk of the jurisdiction, the amount of leverage being used and the presence of any junior or mezzanine financing.

While aircraft ownership requires more significant capital expenditure, it has the lowest ongoing operating cost to the airline compared to an operating or ACMI lease.

The following diagram below illustrates a typical transaction for an airline purchasing a new aircraft on an outright basis supported by debt financing. 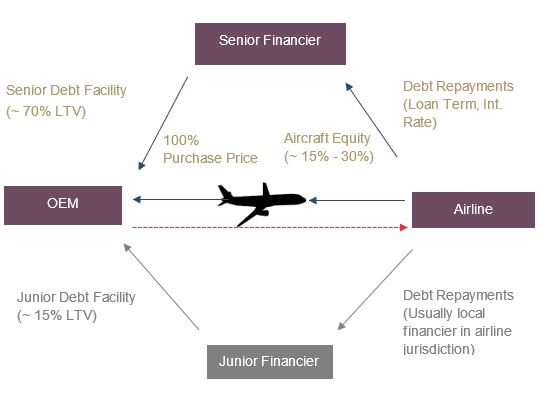 The primary differences between the various aircraft financing and acquisition strategies are summarised in the table below.

To provide a numerical comparison of the acquisition and financing strategies discussed, we have modelled an airline’s operating economics under a hypothetical ACMI lease, operating lease, or aircraft ownership transaction.

The hypothetical scenario above is based on the following assumptions:

ACMI leasing has the lowest capital outlay requirements, albeit at the expense of higher Unit Costs and a Break-Even Load Factor compared to Operating Lease or Aircraft Ownership.

ACMI leasing, as a solution, is suitable for airlines in scenarios where they require an immediate increase in their capacity, for a short period, with a low initial cash outlay. However, it is an expensive option for long-term fleet requirements.

Aircraft ownership is typically chosen by high credit quality airlines that can achieve higher levels of leverage and have the financial capacity to deploy large amounts of capital in return for better unit costs.

If you’re looking to acquire an aircraft through ACMI, operating lease or purchase, don’t hesitate to contact ACC Aviation. For more information on how we can assist you in taking the right fleet decision, contact us at consulting@accaviation.com.

ACC Aviation is a global leader in ACMI arrangements and asset management, with proven experience across all forms of aircraft acquisitions, aviation finance advisory and technical support services. ACC Aviation proudly offers a one-stop solution, with comprehensive support across all stages of the lifecycle, delivering innovative solutions to clients, and ensuring the maximum possible value from every transaction. 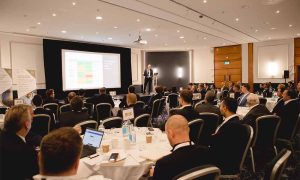 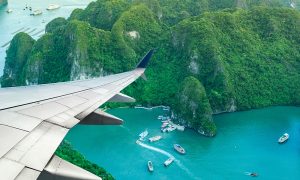 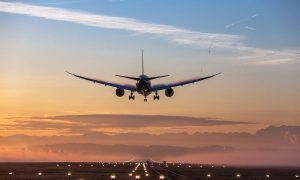 While the European market struggled to keep its head above the water with resourcing issues, the African ACMI market made considerable strides in 2022. The year started with solid projections... 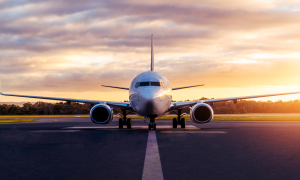