What do the recent sanctions on Russian operators mean for the aircraft leasing sector?

As lessors with exposure to Russian operators embark on major aircraft repossession tasks, our Consulting Team explores the challenges lessors face and options they may consider executing this herculean mission. 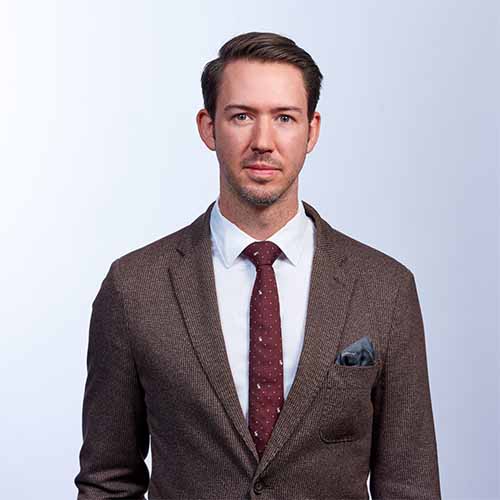 The European Union (EU) and the United States (US) have introduced various sanctions on Russia over its invasion of Ukraine. The sanctions, which are primarily economic in nature, have targeted several industries in Russia, including the airline and aviation sectors. These sanctions prohibit the supply of aircraft and aircraft components to Russian entities or for use within Russia. As a result, western aircraft lessors must terminate their leasing arrangements with Russian airlines by the 28th of March 2022, a thirty-day window from the first announced sanctions.

Size of the Challenge

Over half of the commercial aircraft fleet in Russia is leased

Our fleet data shows there are over 1,049 active commercial aircraft operated by Russian carriers. Of this, 597 aircraft are on operating lease contracts with an estimated current market value of just under $15bl. Russian owned/domiciled leasing entities account for 113 of these aircraft (approximately $3bl.), and although not EU headquartered, the majority of their ownership/financing vehicles are EU entities, likely implicating them in the sanctions despite their Russian ownership.

A significant number of aircraft lessors have exposure to Russia and will need to terminate their leasing arrangements under the newly implemented sanctions. Fortunately, the relative exposure level of non-Russian lessors is not high, with the majority of lessors exposed to no more than 10% of their total fleet. Aercap has the largest gross exposure with 150 aircraft, followed by the Russian lessors, VTB Leasing and SberLeasing with 41 and 37 aircraft respectively.

The following illustrations summarise the aircraft lessors with the largest gross Russian exposure, based on the number of aircraft on lease – not market value, as well as their relative exposure given the overall size of their aircraft portfolios.

Gross Exposure – Number of Aircraft on Lease to Russian Airlines 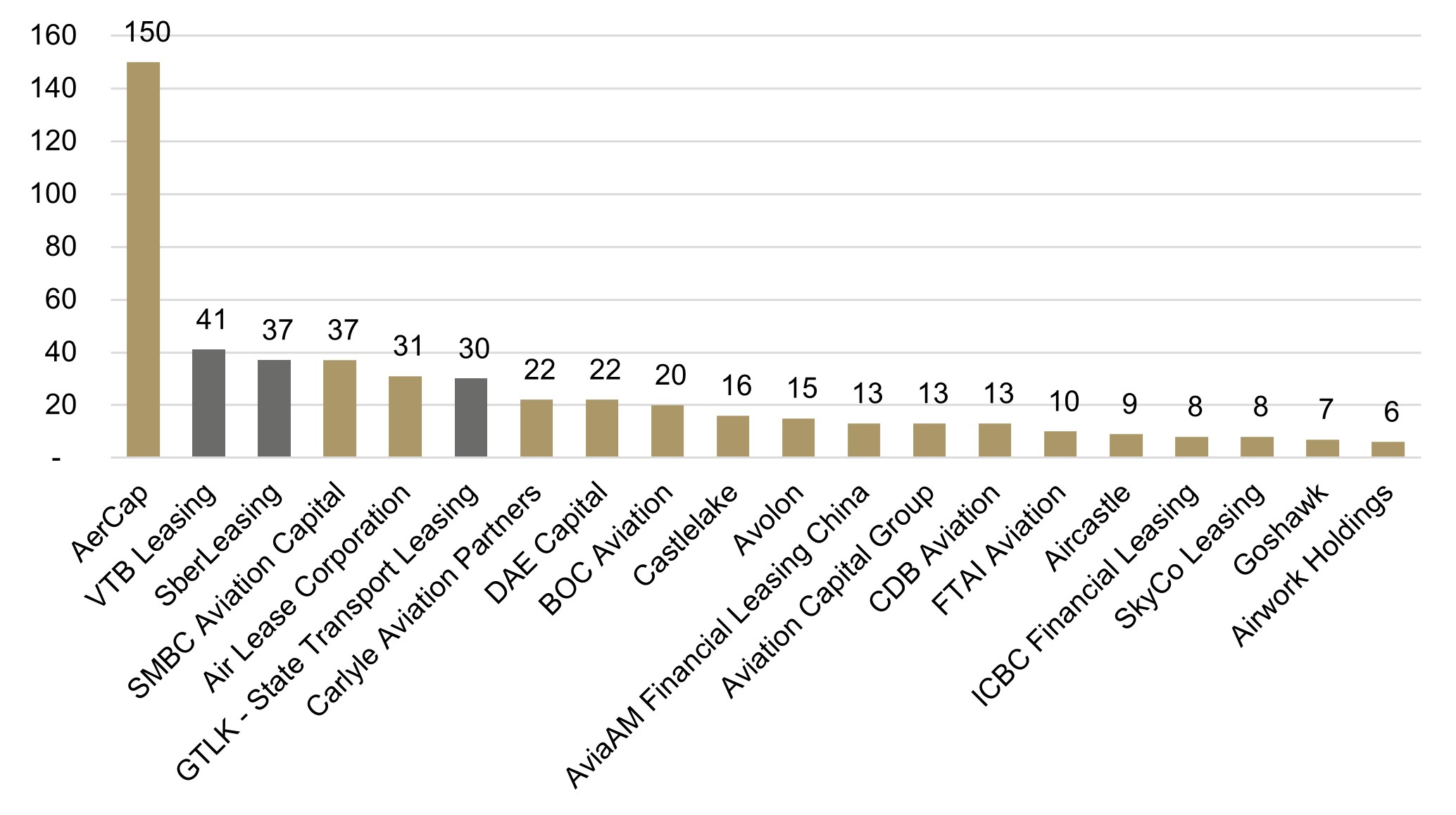 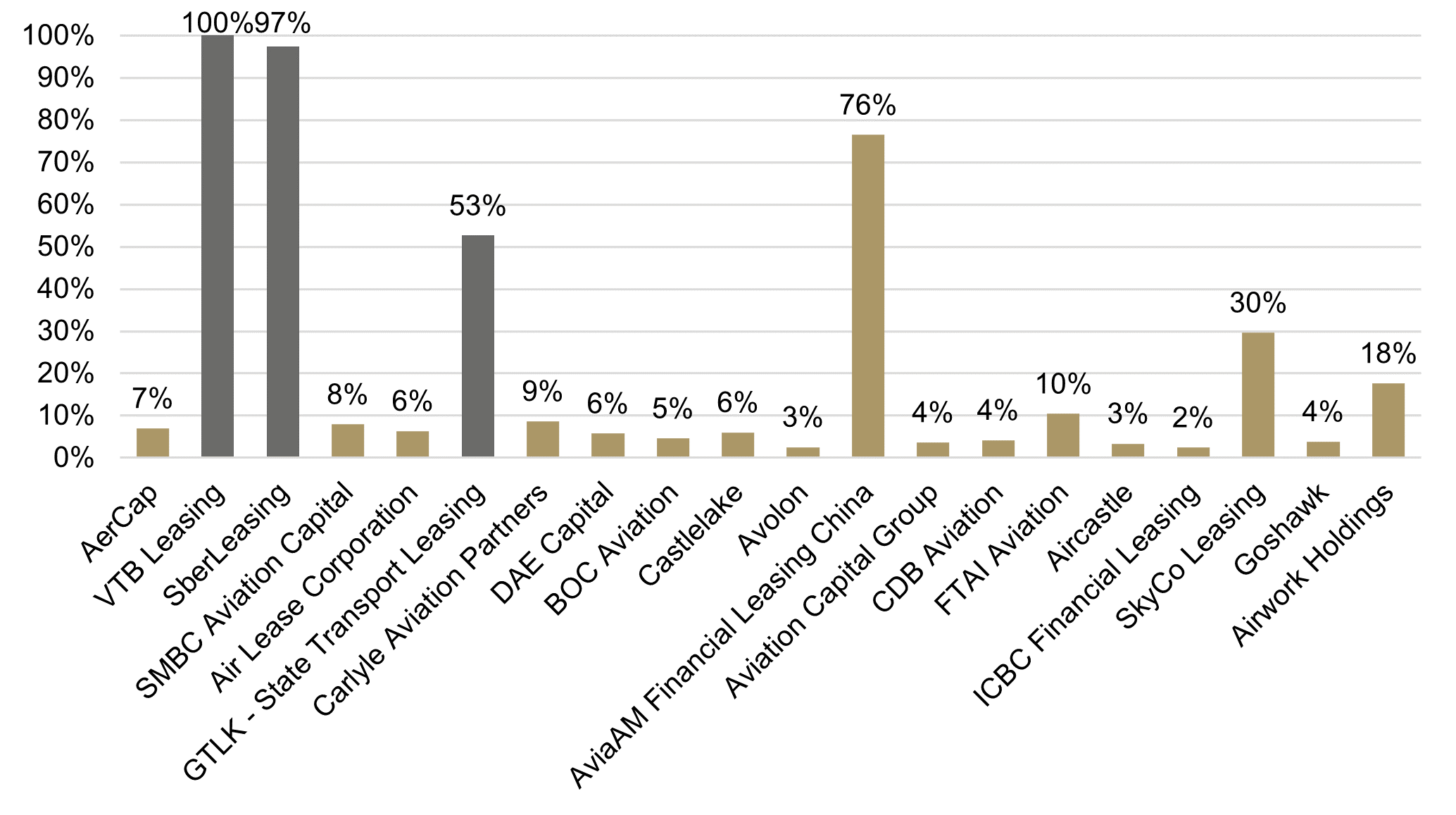 Repossession from a single non-performing airline is a challenging undertaking in itself. Repossessing up to 600 aircraft from over 25 airlines under current market conditions is unprecedented in commercial aviation history and will pose a significant challenge to the global aircraft leasing community. To put the task at hand in perspective, Kingfisher Airlines – the preeminent case study of a difficult aircraft repossession – accounted for 30 leased aircraft at the time, 5% of what the market is potentially looking at today. What is already a challenging project, is further compounded by airspace restrictions, travel bans, sanctions on trading with Russia, and the potential for unfriendly airline and government interference. The following section of this report summarises the various issues aircraft lessors will need to navigate over the coming months as they move to terminate lease agreements and repossess aircraft.

Lessors exposed to these sanctions will have until March 28, 2022, to terminate their operating lease agreements. To execute this, lessors will look to various termination rights found in an operating lease agreement. These rights are not limited to non-payment of lease rental or maintenance reserves but extend to cover external shocks such as sanctions and war. Typically, a lease agreement will have clauses related to “material adverse change”, “force majeure” and “unlawful” which will provide avenues under which a Lessor can terminate the lease agreement. Depending on how the lease agreements are drafted and negotiated, and how long the required notice and cure periods are, some lessors may find it easier or more challenging to achieve lease termination before the mandated deadline. Termination of the lease agreement itself is not the primary challenge, but recovering the aircraft thereafter is.

Another challenge to be faced by lessors, where their aircraft have been subject to cannibalisation, is how they procure and import the parts to prepare the aircraft for repatriation – what government licenses will be needed to legally import the parts and will lessors be prohibited from contracting with Russian MROs to perform the work?

Physical Repossession. For aircraft grounded outside of Russia, physical repossession is not the major challenge – the major challenge rests with those aircraft on the ground in Russia. Given the ban on EU and US flights and the ban on EU and US citizens entering Russia (and many other nationalities), lessors will face significant challenges in sourcing and deploying the technical resources needed to perform a repossession.

Given the circumstances, there is an expectation in the aviation community that as a retaliation measure the Russian government may choose to limit or block western lessors’ ability to repossess aircraft.

Aircraft Records. The value of an aircraft is a combination of the physical aircraft and its maintenance records. An aircraft without records cannot be re-registered in another country or operated by an airline, rendering it of little value. Aircraft Records are managed by the operating airline and typically stored at their base of operation – in this case, Russian airlines will have control and access to the majority of the records. Lessors do keep copies of key records, the depth of this practice varies from the lessor to lessor; however, it is unlikely that lessors will have all available records in their possession and where records are only held in physical copy, they may have none. Recovering aircraft records will be one of the key challenges lessors must address.

Resource Bandwidth. Repossessions, when they do occur, are typically limited to single digits or tens of aircraft. Even under normal circumstances, lessors typically engage third party technical consultants to perform on-ground work as the technical human capital to repossess is significant. With the sheer volume of aircraft that may be subject to repossession, it is going to be a significant challenge to source the volume of technical expertise needed to execute this work. This is further exacerbated by airspace bans and travel bans on several nationalities, which further limit the pool of qualified resources to support a largescale repossession.

Lessors’ best course of action, where possible, will be a negotiated repossession whereby Russian carriers ferry out the aircraft to a neutral location, handing over possession of the aircraft together with the aircraft records. Whether that is practical under the current circumstances is a key question. Any other means will be highly challenging and likely value destructive to the aircraft.

It is also in Russian airlines’ best interest to work together with the lessors. A hostile or uncooperative repossession will likely block those airlines, and the country generally, from having access to leased aircraft for the foreseeable future. There is industry optimism that Russian airlines are willing to be supportive in this process. The ultimate decision, however, is likely to be made at the highest levels of government.

New UK legislation is expected to be passed in the coming days that will prohibit UK-based insurance and reinsurance providers from undertaking financial transactions connected with a Russian entity or for use in Russia. This is significant; we can expect that a substantial number of insurance policies purchased by Russian operators will have been insured or reinsured in the London market.

The exact wording of the legislation is not yet known. Nonetheless, there is a high degree of confidence that once implemented, the outcomes will be twofold; 1. Russian airlines will no longer have access to the London insurance market for insuring aviation assets, and 2. existing coverage will no longer be valid. Once the coverage lapses the aircraft will be grounded and Russian airlines will need to seek alternative markets to insure the aircraft.

Lessors typically have other policies or are listed as additional insured in the airlines’ policies. Some of such policies include AVN 67N, Hull War Insurance (LSW 555D), which provide coverage for seized assets by a state, cannibalisation of aircraft or reconstitution of unrecoverable records. They do not however, hold the policies required to operate the aircraft which will be needed for repatriation of the aircraft. One of the challenges will be where such policies are procured by the airline with lessor listed as additional insured; will these policies still be covered given the restrictions to be imposed by the new legislation? There will be clarity around this once the final wording of the legislation is made available, and it may be possible that certain limited derogations / exemptions are available for contracts that predate the legislation imposed.

It is unlikely that lessors will be able to transition and remarket aircraft as quickly as they would hope to. Should mass repossessions take place, MRO capacity will become a key bottleneck in the aircraft transition process.

Maintenance Repair and Overhaul (MRO) capacity is largely fixed – set to accommodate the natural demand levels of aircraft moving through their maintenance cycle and transitioning between lessors and airlines. With the easing of Covid19 travel restrictions and gradual increase in travel demand, airlines are starting to take their aircraft out of storage and return them to service, thereby pushing additional demand into the MRO community – which is now starting to hit the limits of its capacity.

Aircraft lessors, especially those with larger Russian exposure, will likely face significant financial losses as a result of the termination and repossession of their fleets.

These losses will come in several forms, including:

Lost rent. Aircraft lessors will not receive the rent due for the remainder of the leases (which can be upwards of 10-12 years) and will need to remarket aircraft at lower lease rates and typically shorter lease duration. Given the number of aircraft that would come onto the market in such a short period of time – this will likely drive an oversupply on many aircraft types further reducing the lease rates that can be achieved.

Cost of repossession. The cost of repossession is not insignificant; teams of technical and legal resources need to be deployed for long periods of time to execute the repossession, any claims or liens against the aircraft must be cleared by the lessor, the costs of repatriating the aircraft must be born by the lessor, and until the aircraft is remarketed, the lessor must pay for the ongoing insurance and maintenance costs of the aircraft. Furthermore, the lessor must pay for transition costs – the costs associated with bringing the aircraft into a condition in which it can be remarketed to another airline. This may include the overhaul of large components such as engines and landing gears, reconfiguration of the aircraft’s interior and the performance of Airworthiness Directives (ADs) and Service Bulletins (SBs). These costs can easily run into the tens of millions of dollars per aircraft.

Western Aircraft lessors face a herculean task in executing these repossessions. The situation is unprecedented in the history of aviation.

How ACC Aviation Can Help

Leveraging our multidisciplinary capabilities across the aircraft transaction lifecycle, ACC Aviation can provide various forms of support to aircraft lessors during these unprecedented times.

Our valuations and advisory team can provide value opinions, impact assessments, forecasting services, and other advisory services to support decision making and compliance.

As the largest arranger of ACMI leases globally, we are well positioned with our operator network to place lessor aircraft onto host AOCs, and monetise the aircraft into the ACMI and charter markets – while longer-term operating lease placements are found.

Want to know more about our full suite of aviation consulting services?